Bob Lee was born April 12, 1938 and grew up in Dickson, Tennessee. He studied music education at what is now Middle Tennessee State University and embarked on a lifelong career that continues to echo in countless band rooms.

Bob started his teaching career in Lewisburg in 1960, and after a year there, a year in Columbia, and 6 years at Giles County High School in Pulaski, Bob moved to Murfreesboro in 1968, taking on the highly-acclaimed Murfreesboro Central band program and continuing the tradition of excellence he inherited there.In 1972 Central was divided into two new high schools, with Bob responsible for establishing the band program at Riverdale High School, where he taught for another 10 years.

Bob undoubtedly made a huge difference in the lives of his students, but the move to Murfreesboro created an opportunity whereby the drive to excel he instilled in his own students would be transmitted to music students across not only distance but years as well. Located practically next door to Middle Tennessee State University, Bob hosted a steady stream of student teachers at Central and Riverdale, often as many as four in a single school year. Bob was a great mentor with whom to student teach. He gave the novice teacher enough room to stretch, experiment, succeed and fail, while all the time providing a safety net to prevent falling in the worst sinkholes of rookie mistakes. Student teaching with Bob Lee was the opportunity to see the art of teaching at its best: to learn from a master techniques he had acquired through his successful career. With Bob, it was so much more than teaching music. It truly was about teaching kids, and student teachers could see that in his band room every day. In 1982 Bob accepted the position of Director of Bands at Austin Peay State University in Clarksville, and was awarded Emeritus status upon his retirement from the university in 2003. At APSU, Bob’s legacy in music education in Tennessee and beyond continued to grow, as he helped guide over 20 years of future music educators during their collegiate careers and after, because Bob Lee’s mentorship didn’t end when you finished your practice teaching assignment. Throughout his life, Bob has been the best kind of friend a fellow band director can have. He will never tell you what you should do. He might suggest a few possibilities to consider, or tell you what has worked for him in similar situations, but in the end, you usually find he has guided you to a solution you might have found on your own, if only you could find the right starting point.

Bob Lee’s bands gave many outstanding performances, both on the football field and the concert stage, including four performances for the Tennessee Music Educators Association state conference. Bob has served music education in Tennessee as President of the Middle Tennessee School Band and Orchestra Association, the Tennessee Chapter of Phi Beta Mu, and the Tennessee Music Educators Association. Among the many awards and recognitions he has received are included both the Certificate of Merit for Marching Excellence and the Citation of Excellence from the National Band Association. But most importantly, Bob Lee stands as a true giant in our profession, not only because of his achievements and honors, and his impact on music educators as a friend and mentor, but more because of the manner in which he has accomplished all this. For Bob Lee is an example of one who does great things without calling attention to himself, whose focus is always turned outward to the good he can do, not the glory he can grasp. Bob Lee is something that is getting harder and harder to find: a successful man who stays above the fracas and is a true gentleman. For this, as well as all he has done for the advancement of music education and particularly bands in Tennessee for so many years, I am honored to submit Mr. Bob Lee to be included in the Tennessee Bandmasters Association Hall of Fame. 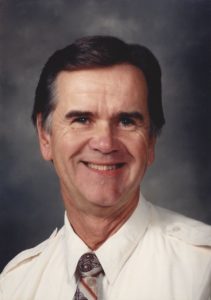 Rufus is the son of Albert W. Long and Helen C. Ragsdale Born in Hendersonville Tn. Feb.18th, 1929. Rufus is a graduate of Issac Litton High in 1947 and Peabody College with his masters in music 1951. He was a member of Phi Mu Alpha music fraternity. In November of that year, he married his beautiful wife, Mary Hannah Gillespie. Rufus joined the Musicians Union in 1947. During his high school and college years, he maintained his own band, the Rufus Long Orchestra.

After beginning his first year as a band director in Alabama, he received his notice for the draft board, he decided to join the US Air Force and was stationed in Madison Wis. with the 504 AF Band where he was assigned as conductor. Later he was transferred to Washington D.C. and became a member of the famous “Airmen Of Note”.

After his tour of duty, he became a teacher in the old Nashville City Schools in 1956, first as a roving elementary teacher then became director of East High Band. Also in 1956, he became first flutist with the Nashville Symphony and also was able to do numerous recordings in the new recording industry. All this time, he continued running his own band. After 9 years at East, he was transferred to Hillwood and remained for 6 years. In 1974, he was appointed director of the Hendersonville Band where he remained for 3 years followed by 3 years as an automobile salesman. In 1980, he was asked to start the band program at the new Beech H.S. in Hendersonville followed by 4
more years at Brentwood H.S. In 1988, he retired from teaching and then performed for 5 years at Opryland as a musician. In 1993, he and Mary moved to Florida where he played at the Broadway Palm Dinner Theater for 11 years after which Mary’s ill health required them to return to Nashville and family. Rufus took up teaching privately for several more years plus playing with several bands.

After Mary’s death, in 2010,Rufus married a lady from his college days, Evelyn Aldred.