Jewel Tilson was born in Unicoi County and attended Washington College Academy. He received his Bachelor’s degree from East Tennessee State University and received a Master’s Degree from the University of Illinois in Champagne-Urbana, Illinois.

After finishing his degree in Choral studies at East Tennessee State University, Jewell said that he was “talked into” teaching band by former Elizabethton High School band director, Mel Kelly.

During his teaching career, Jewel’s bands were noted for outstanding concert and marching performances with his bands receiving numerous superior ratings. While he was directing in Chattanooga, the City High School Band won first place at the inaugural Contest of Champions held at Middle Tennessee State University. While in Kingsport, the Dobyns-Bennett High School Band became one of the first high school bands in the state of Tennessee to travel internationally. Under his tutelage, Dobyns-Bennett Band received the Minister of Education Award for Musical Performance at the International Band Festival in Vienna, Austria in 1972. In addition, the Dobyns-Bennett Band traveled to Spain during the 1970’s and enjoyed a European tour in 1980.

Jewel resides now with his wife Koleta in Kingsport, Tennessee. 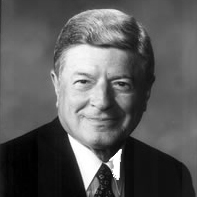 W J Julian, a native Tennessean, received hi B.S. degree from Tennessee Tech. He immediately joined the U.S. Navy where he served for three years in the Pacific Theater. His ship (LSM 318) was sunk by a Kamikaze plane in the Philippines on December 7, 1944.

He has served as adjudicator, clinician and conductor thorughout the United States, Mexico, Canada, Europe and Japan.

Dr. Julian resides in Knoxville with his wife, Faye, who is Dean of Communications and Information at the University of Tennessee. His daughter, Jennifer is with the YMCA in Raleigh-Durham, NC, and his son, Jeff, is a salesman in Knoxville. He is also the proud owner of Sam, a Golden Retriever.